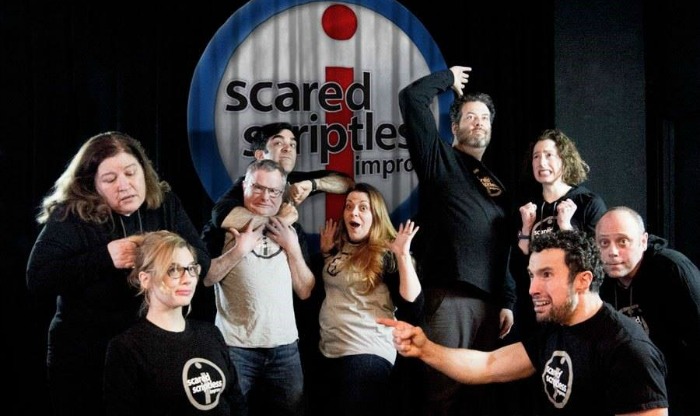 Is there anything better than laughing while supporting a great cause? Short answer: No, there’s not.

This holiday season, local improv comedy troupe Scared Scriptless has picked Catholic Social Services as the recipient of the proceeds of their December show. It is on Saturday, December 22 at 8:00 p.m. at 49th State Brewing Co., located at 717 W. 3rd Avenue. Buy your tickets now!

If you don’t already know about Scared Scriptless, you’re missing out. They are Alaska’s longest running improv comedy troupe, bringing theater and comedy together in energetic, fast-paced, and spontaneous games, in the style of “Whose line is it anyway.”  Their shows develop live, based on the audience calling out suggestions for the troupe to run with. As you can imagine, that means their shows often include adult content and language, so it’s probably best to get a babysitter for your kiddos that night. Check out The Anchorage Press story on them.

Their director, Erik Dahl, said, “While Scared Scriptless tries to build our community through laughter, we also know that supporting a group that helps those in need is vitally important. Beyond just the mission, we also wanted to make sure we had a group that we could partner with for the show. Improv is about collaborative communication, and those same principles stand true in organizing a successful show! We wanted to be able to share the mission of the charity and not just provide a donation.”

For the December 22nd show, Scared Scriptless will have a holiday theme, played out in two acts. The first act will be long-form. Troupe members will take audience suggestions to tell true stories, which will inspire the rest of the act. After an intermission, Scared Scriptless will jump into the rapid-fire, short-form style they’re known for, culminating in an improvised rendition of the 12 Days of Christmas.

So buy some tickets, laugh a lot, and support Catholic Social Services. We’ll see you there!