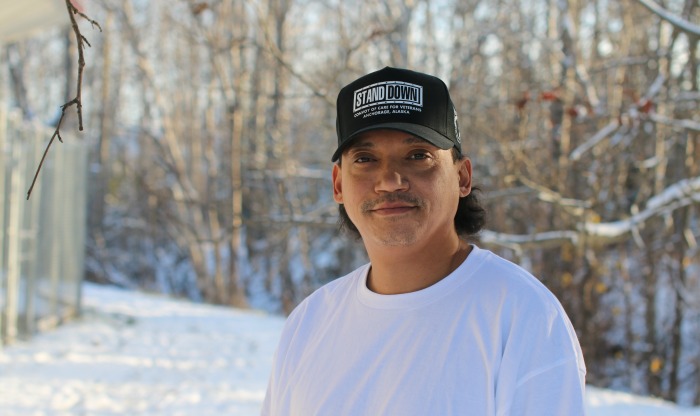 So many people’s homelessness begins with the death of a loved one. Cancer.  Car accident.  Suicide.  Tragedy can strike us all.  The person closest to the deceased is left reeling, and we each cope with grief differently.

Phillip’s wife passed in 2010. He looks you in the eyes when he says that.  She had a massive heart attack and, less than 30 minutes later, was dead.  Phillip’s hands, placed side by side, flat on the table, hint at the grief he still carries, even though his posture and voice are relaxed.

Phillip has two children. After his wife died, he knew he was struggling.  He also knew his children needed good care and worried he couldn’t provide it.  So Phillip asked his parents to help them.  But then his life spiraled further out of control.

Leaning forward, hands still on the table, Phillip says, “Yeah, I had to go through all that to get where I am.” Then he looks away.  His statement seems to be a reminder to himself, more than it’s intended for you.

Phillip got out of jail about fifteen months ago. He had the clothes on his back, $37 in his pocket, no one to call, and no place to go. But Brother Francis Shelter welcomed him in.  Still, Phillip felt hopeless.  He wanted to get a job, to get a home, to have his children back.  But how?

That first week, Phillip wandered downtown Anchorage, thinking. He points to a cargo bay along the 5th Avenue Mall.  “I’d sit in there, so cold I’d almost pass out, praying I’d die.”  He nods, now leaning back, and goes on.  “The more hopeless I felt, the more I was ignored…and it just reinforced it.”

Fortunately Brother Francis Shelter and Homeless Family Services had Phillip’s back. They believed in him, urging him to begin working with a caseworker.

Phillips laughs. “Bubbly Sarah showed up.”  He tells you how she got him clothes, a job, bus passes.  “She’s more than a caseworker,” Phillip says.  “She’s an advocate.”

Sarah was dead-set on getting Phillip housed.  She even texted him links to Craigslist apartment postings and emailed him leads.  In less than a month, Sarah found him a home, and Phillip found hope.

“If you’re willing to work, willing to do something, there is no way you cannot succeed with Catholic Social Services,” Phillip says.

For a year now, thanks to Sarah’s and Catholic Social Services’ ongoing support, plus Phillip’s hard work, he remains housed, works his job, and sees his children again. Phillip says, “Homelessness can be a starting point, not a stopping point.”  With your support, we can do more to make sure homelessness is a rare, brief, and one-time event, just like it was for Phillip.

I Want to Help End Homelessness!

Want to read more stories like Phillip’s? Check out Brother Francis Shelter Changed a Father’s Life, Then a Son’s, and Now a City’s or look on our Blog.