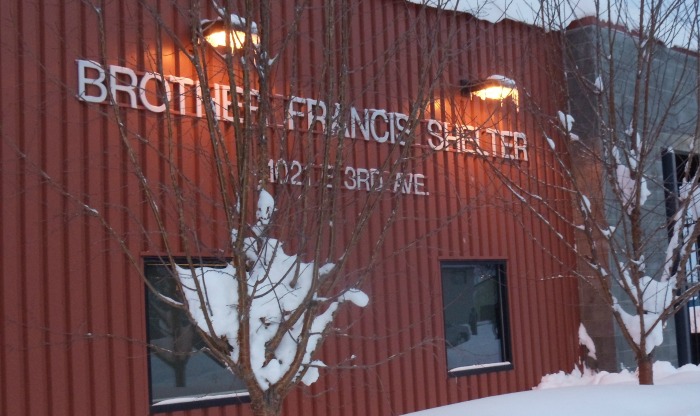 Two weekends ago, Lisa, our Executive Director, was home on a Saturday night when she got a call from the Executive Director at Bean’s Cafe.  Since December 20, it had been running an emergency cold weather shelter, thanks to funding from the Municipality of Anchorage, as back-up to Brother Francis Shelter until April 30.

With temperatures in the single digits, more people experiencing homelessness needed a warm place to go.  So Bean’s Cafe reached their capacity too and wanted to brainstorm with Lisa about what to do.  Plus, with extremely cold weather forecasted in the coming days, they realized they needed a back-up plan to the back-up plan.

Lisa immediately texted David, the Program Director for Brother Francis Shelter, to fill him in and see what alternatives we had.

Sorry to bother you… she began.

Catholic Social Services and our seven programs are used to adapting and navigating things as they come up.  It’s not easy to predict what issue will arise next.  But this extremely cold-weather made conversations about finalizing a back-up plan imperative.

By Monday morning, a group of community leaders made up of Directors and Managers from organizations around Anchorage was on it.  They were willing to work double-time and put in whatever resources they could to prevent anyone from being left out in the freezing cold.  Can you donate blankets or other cold-weather items?

First, this team met to strategize.  The issue at hand was getting people out of the cold.  To do so, they needed more space, which could be achieved by temporarily turning the emergency cold weather shelter into a warming center because it would allow for extra capacity.  But they needed permission to make those changes.  Fortunately, the Anchorage Health Department helped get that granted by working with the Fire Marshall.

Now, they had to take care of the logistics – scheduling extra staff.  David started making calls to get the details worked out.  Phoenix Protective Corp, a company employing security officers, accommodated our last-minute request and contracted more staffers for 12-hour shifts.

Throughout Monday evening, David fielded texts and calls from other shelters’ staff as everyone worked to get as many people inside and warm as possible.

If there are any young adults, go to Covey, one said, using the nickname for Covenant House.

David passed the information along to staff doing in-take at Brother Francis Shelter.  A little bit later David got another text.  This one came from the Downtown Hope Center.

We have three beds available now and then we’re saving 10 air mattresses for your referrals.

The Downtown Hope Center also created a warming area for 20 people, and Brother Francis Shelter sent people there too.  But even with all the shelters’ increased capacity, more space was still needed, not to mention a long-term solution with this incredibly cold weather forecasted to remain for days to come.

So Tuesday morning it was time to act again.  No more waiting.  Where could we set up emergency shelters for other nights?  If another warming center was secured when temperatures fell below 10 degrees, then guests at both Brother Francis Shelter and Bean’s Cafe could sleep.

Texts, emails, and calls began occurring rapidly as the team worked together to come up with timely, efficient, and effective solutions.  They proposed different locations, but they kept running into barriers that prevented them from securing and staffing a shelter.

Meanwhile, Natasha and Steve at the Anchorage Health Department were making calls too.  They came up with the idea of reserving buses, which could idle in the Brother Francis Shelter and Bean’s Cafe parking lot.  At least, that way, folks could come in and warm up from the almost 0-degree temperatures.  But at the last minute, logistical elements prevented that from occurring.

Later Tuesday evening, Lisa checked back in with David to see how things were going.  The last thing she said was:

Tonight though – people warm and alive.

She was right.  It might not have been perfect, but everyone made it through the night.

There was even more urgency to get this back-up plan nailed down.  And the team finally succeeded.  They confirmed a back-up plan for nights the temperatures dropped below 10 degrees and both Brother Francis Shelter and Bean’s Cafe were full.  The Downtown Transit Center would open its doors as a warming center from 10:00 p.m. to 6:00 a.m., therefore allowing the most possible amount of space to sleep and get warm between the different locations.

Now, thanks to the ingenuity and commitment from each of the Directors, Managers, and many people across various programs, including Catholic Social Services’ own Executive Director, Anchorage has a plan in place for nights when it’s below 10 degrees and people experiencing homelessness still need a place to go.

I Want to Help End Homelessness!